The degree of lost circulation is frequently expressed as the following:

Ahmed Amer noted in his 2020-2021 SPE Distinguished Lecture that different causes of lost circulation have different patterns of fluid loss.  Studying the pattern of fluid loss can help identify the root cause.

Even minimal lost circulation issues should be monitored and/or evaluated to ensure they do not signal the beginning of more serious problems – which could result in significant fluid losses, operational difficulties, and NPT. It is important to determine the magnitude of the loss, any increase in the rate of loss, the probable cause of lost circulation, and to mitigate the losses efficiently and economically.

Identifying the cause of lost circulation may also help determine the appropriate treatment method. Natural fractures or matrix permeability are best mitigated by plugging, bridging, or sealing the fracture with LCM, or applying a chemical solution such as a thixotropic fluid, settable fluid, or swelling additive.

The formulations for LCMs range from thousands of material properties and various particle size distributions (PSD), as well as: swellability, degradation rate, resiliency, local availability, cost, and compatibility with drilling fluid and drilling equipment. Preventative measures could include adding LCM to the drilling fluid when approaching known natural fractured formations.

Lost circulation can also be caused by operational actions such as wellbore fluids exceeding the fracture gradient, increased wellbore pressure during surge/swab operations causing fractures in the formation wall, or simply by drilling fluids invading the pores and destabilizing the formation. The rock type, permeability, porosity, formation properties, subsurface formation burden, drilling operations, shear degradation, and even the well design or type can all have an effect on the potential of lost circulation.

Solving the lost circulation problem caused by operational issues may require more complex solutions than simply “plugging the hole.” For example, surge and swab pressure issues can be mitigated through tripping and drilling practices that avoid creating a pressure wave that would result in losses in fragile formations. Other operational directives may focus on maintaining mud weight above the pore pressure and below the fracture gradient – also referred to as staying within the drilling window. Another strategy is to use fluids with a low equivalent circulating density (ECD) to limit the equivalent circulating density. Many of these types of engineered solutions are guided by sophisticated software that monitors and guides operations by modeling downhole hydraulics in real time. Other methods of resolving lost circulation include strengthening the wellbore or isolating it from the formation.

Figure 1 – The formation of the barrier shield between formation pores and the wellbore is created under differential pressure. Note pressure differential of 1,000 psi is for illustration purposes only and not a requirement. (SPE 169936)

Photographs of the WBS on an aloxite disk demonstrate the material forming a bridge across the formation face, preventing both fracture growth and fluid invasion (Fig 2). 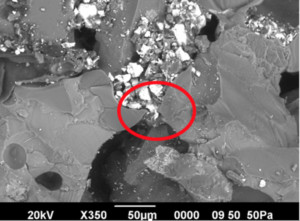 Field testing has revealed a variety of possible scenarios that this type of technology can address. In the following list and in Figure 3, SPE 204109 highlights several of these benefits: 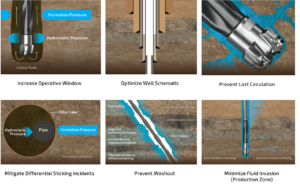 WBS technology can be customized in size, are compatible with both oil- and water-based fluids, and do not have an adverse effect on the fluid’s rheological profile. The technology has been demonstrated in a number of wells and documented in many industry publications; a selection of these technical papers are highlighted below.

SPE-204109 – Campeche Bay, offshore Mexico.  To reach the target formation, the operator must navigate through an unstable formation notorious for losses, stuck pipe, and significant NPT. The authors concluded, “This well, utilizing the barrier technology to mitigate the wellbore instability and drill within a narrow fracture gradient operating window, was the first in the area to have zero loss of drilling fluid as compared to the typical 5 to 10-m3/hr circulation losses encountered during exploration drilling in the intermediate section, which is characterized by interbedded layers of carbonates, shales, and sandstone under high-pressure, high-temperature (HPHT) conditions.”

SPE-202418 documents the use of WBS in an exploratory well located off the coast of Southern Mexico with a narrow operational window. WBS isolated the formation from the ECD, reduced losses, prevented gas migration, and allowed for the pumping of heavier cement, without losses, where the ECD approaches or slightly exceeds the fracture gradient.

AADE-20-FTCE-027 discusses how controlling the critical transition time during cementing stops gas migration. The way these microparticles lock together under differential pressure is a unique mechanical characteristic of this system, as it keeps them together and in place on the wellbore face. This barrier enables successful cement circulation in instances where ECD limitations would normally result in incomplete cement returns and top-of-cement results.

SPE-198177 – While drilling the Mutriba Formation, a shale-limestone formation notorious for stuck pipe and lost circulation, was stabilized by WBS technology. Consistent additions of the WBS additive resulted in a thin, flexible, and tight seal, as well as a stable wellbore. The entire section through the Mutriba Formation was drilled with 100% returns and casing run without problems. The operator saved 21% in additional costs on that section and completed it seven days ahead of schedule. The authors concluded that when used properly, the WBS can increase fracture initiation pressure and thus extend the pressure window for drilling operations.

SPE-198407 – This HPHT well (offshore Sarawak, Malaysia) transected a gas reservoir and was 6,800 psi overbalanced (46,900 kPa). The 8½-in. section was successfully drilled with zero NPT, without differential sticking, or indication of drag.

AADE-19-NTCE-090 – Powder River, Basin (Wyoming).  The WBS spacer system was pumped ahead of the cement. The case history compared the use of the WBS spacer to a neighboring well with very similar circumstances, but without the WBS spacer. The cement bond log for the job with the WBS showed “a much more comprehensive level of isolation” and full circulation was achieved throughout the job without using lighter cement.

OMC-2019-0969 – Case studies from Kuwait entailing the drilling of the Mishrif, Zubair, and Upper Burgan formations. Among the highlights of these case studies, zero fluid-related NPT was noted, improved stability in stressed shale formations, elimination of differentially stuck pipe in low-pore-pressure formations, and mitigation of induced losses with WBS technology. The WBS fluid prevented the transmission of destabilizing invasive fluids and pressure into the formation.

SPE-193803 – Abdali Field, Kuwait transecting the Burgan and Shuaiba Formations. The use of WBS technology eliminated hole stability concerns in an area known for well instability, and saved
the operator 54% on rig and drilling fluid costs. This resulted in the well being drilled and completed in half the time it took to drill the offset well. The low-pressure zone was not completely isolated from the high-pressure formation.

AADE-18-FTCE-124 – South Texas, Wilcox Formation, Eagle Ford Shale. Without incurring seepage losses or wellbore ballooning/breathing, the operator was able to control gas migration by increasing the mud weight. The PWD tools verified the successful drilling without lost circulation using ECD that exceeded the known fracture.  The use of the WBS additive was determined to be the differentiating factor, leading to the ability to use a higher ECD and eliminate a casing string.