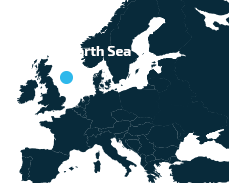 Wellbore instability was encountered on two high-angle directional wells for Zennor Petroleum in the UK Central North Sea in Block 21/5. In both wells, the challenge was to place the 9 5/8-in. casing to bottom in 12 ¼-in. hole, ultimately leaving a large rat hole across the time sensitive Rodby- Sola formation. In these formations, potential failure tends to come from fluid/pressure transmission getting in between the interbedded claystone layers of the formations. In this event, high mud losses occurred while running and cementing the casing. The losses complicated the delivery of the 8 ½-in. reservoir section. The decision was made to sidetrack and re-drill one of the 12 ¼-in. sections to case off these time-dependent formations.

In order to stabilize the Rodby-Sola formation, a combination of FLC 2000® and FLC® SUPREME were incorporated in the drilling fluid system. These drilling fluid additives were designed to eliminate fluid loss, shielding the formation from long term destabilization.

Wellbore instability was greatly reduced on the sidetrack (12 ¼-in. hole) for Zennor Petroleum. The operator also noted the following improvements: